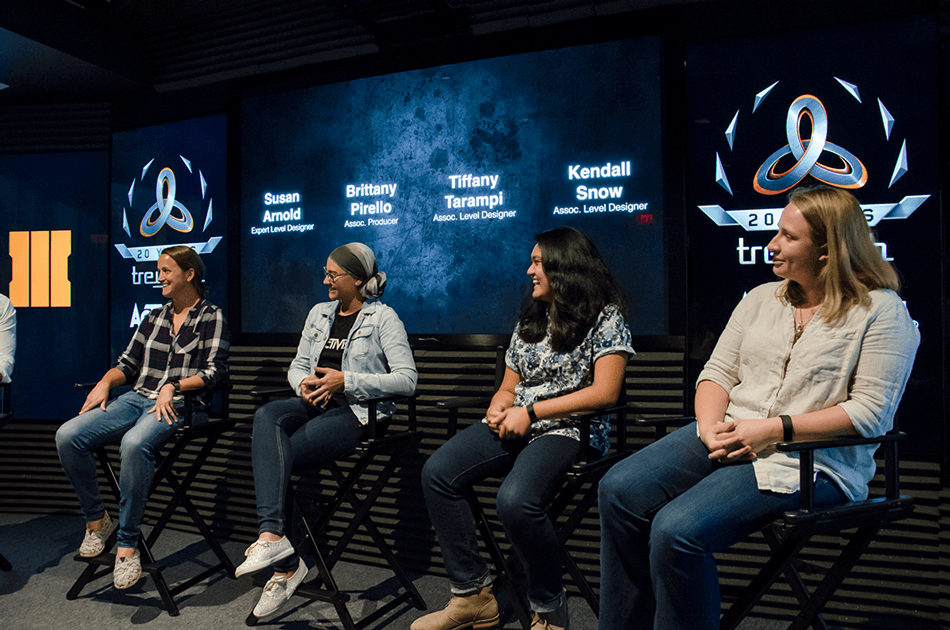 Recently, Treyarch had the pleasure of hosting the first-ever SoCal Insider’s Event from Women in Games International (WIGI).

Women in Games International is an organization comprised of both men and women that work to promote inclusion and advancement of women in the global gaming industry.

The evening featured an hour-long panel discussion with several members of the studio’s development team, exploring what it means to be a woman working in the world of first-person shooters.

“Treyarch has enjoyed the relationship with the Women in Games organization and we thought that this would be a unique opportunity for us to open up as a studio and share our culture with the broader community of game developers,” said Jennifer Ripley, Treyarch’s Senior Recruiter. “A big thank you to Krissie King, the Director of Operations at Women in Games for the opportunity to host an amazing panel.”

This intimate gathering served as a unique opportunity to directly engage with women behind the development of the Call of Duty: Black Ops series, some of the biggest-selling, and most-played console games of all time. Four female developers shared their respective stories about their involvement with the gaming community, offering background on their introduction into gaming, and their respective journeys to Treyarch. The panelists included:

Although each of the panelist had different stories, each shared similar themes: many had siblings that introduced them to the magic of video games, while others had inspiring mentors during their academic careers. No matter where their love for games came from, each panelist came to a point where their passion intersected with their career and they wanted to see it grow within the right community.

“[Treyarch] exposed me to a community of people that were very driven,” said Kendall Snow, an Associate Level Designer, and graduate of the studio’s highly-competitive internship program.

A community that fostered their own personal growth and one that showed that there are women in leadership roles that have walked in their footsteps was something all the panelists appreciated.

“There’s a lady here that does what I want to do… and she’s a BOSS,” quipped Tiffany Tarampi speaking about the skills of expert level designer Susan Arnold. Tarampi’s emphatic statement led to some cheers from the crowd, but also resounding agreement. Diversity wasn’t theoretical, it mattered and it enriched the workplace community for all the panelists. “Coming here… I feel a bit more confident,” Brittany Pirello remarked.

Pirello further expressed the value of putting that confidence in action: “I possess a unique perspective in the workplace – there is insight to be gained and better game quality that comes from a more diverse workforce, and as such, it’s really valuable to speak up.”

“Speaking up” was a theme echoed by the other panelists along with importance of recognizing biases and taking a stand against them. Kendall Snow added, “Taking an active step to be aware of those biases changes the candidates you take in.”

Changing the landscape of the gaming industry isn’t an easy task, but the panelists believe it’s possible. “It’s in our power to change the culture with what we produce,” claimed Tarampi. “And changing the culture with what we produce starts with positive portrayals of women in video games like the female Specialists in Black Ops III.”  Regarding potential female employees, Tarampi is already working to widen that pool with an outreach program entitled, “Ladies who Launch.” Both of these initiatives, along with others serve to tackle a problem and help create a better culture, community, and gaming experience.

As a studio, Treyarch partners with organizations like WIGI to highlight and promote diversity, which the studio believes leads to the creation of better games for everyone. To do that, female developers, artists, animators, producers need to connect with one another to know it is possible. “Creating that community [matters],” Pirello stated about connecting with the community of women in the gaming industry.

Pirello added, “…[and] events like this are helpful to make that connection.”

Treyarch continues its support for veterans during annual ‘Day of Service’