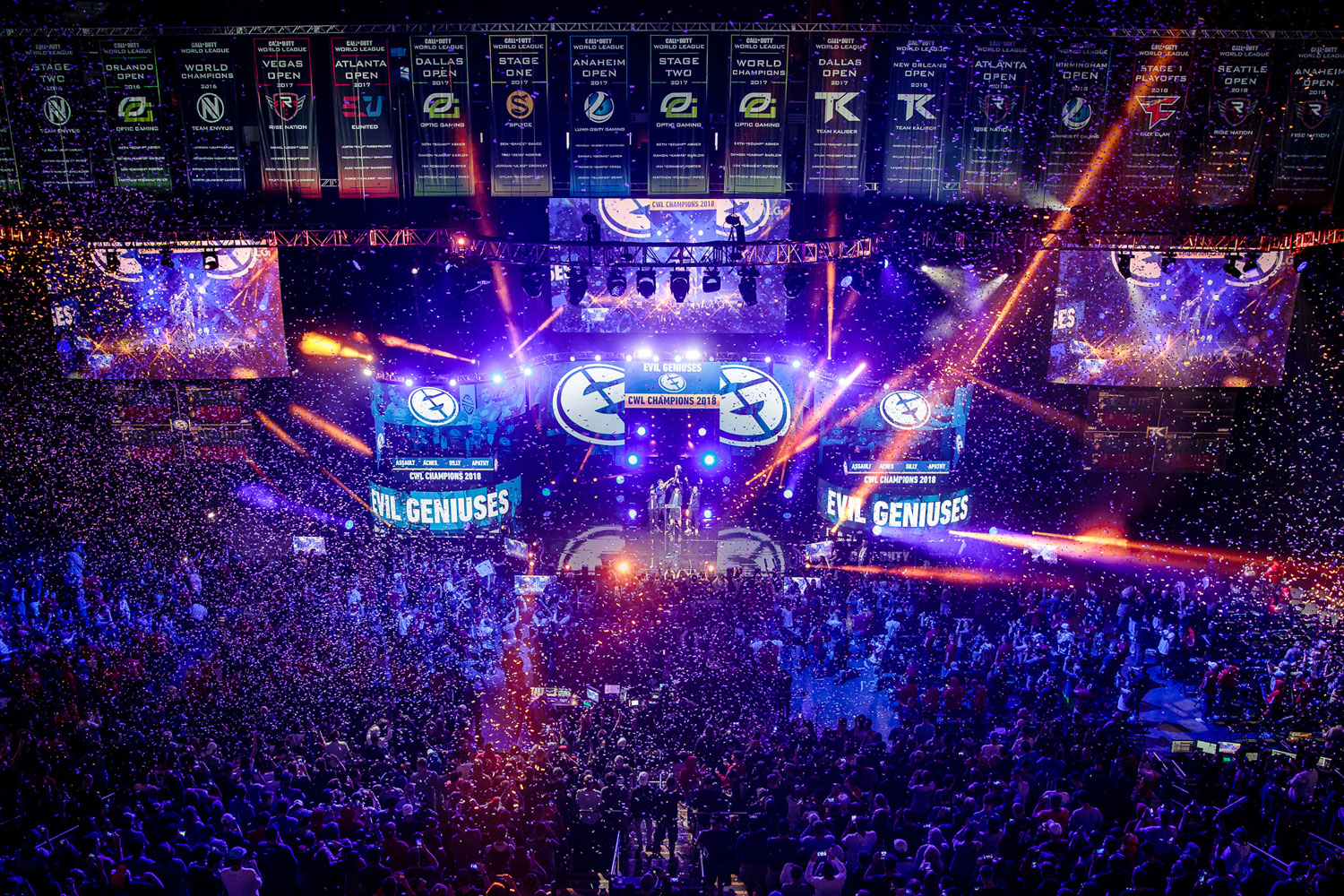 Here’s how we’re making Black Ops 4 our deepest and most competitive game to date.

The spectator part is critical to the success of competitive play – the league gets stronger as the audience grows bigger, and for that reason, Call of Duty®: Black Ops 4 multiplayer is built with the goal of making the game as fun to watch as it is to play. The audience for competitive play and the CWL will grow by bridging the gap between “pubs” and “pros” and making the game that’s watched on the main stage as close as possible to the game that’s played at home on the couch.

For that reason, Black Ops 4 is moving to a 5v5 format for the first time in Call of Duty World League history. This is a game that was built from the ground up for 5v5 – maps, spawns, weapons, and Specialists are all designed and fine-tuned for the optimal pace of play in teams of 5. And the core gameplay of public matches in objective-based modes will be played 5v5, so CWL as a spectator experience will be familiar to all players of the game.

But that’s just the start. Read on to learn more about how we’re building out new systems, tools, and features to make Black Ops 4 our deepest and most competitive game to date.

Pro Series
Pro Series is our in-game set of playlist rules featuring official CWL rules, team format, map rotation, and game types that allows players to play like the pros. Form team rosters, scrim in competitive matches to hone your skills, and put it all on the line in weekend events in Pro Series format to win in-game prizes and recognition. You or your team will compete against other players or teams of similar skill in competitive matchmaking.

As Treyarch, professional COD players from around the globe, and the CWL work together to define the absolute best format for competitive play in the upcoming CWL season, Treyarch will keep the Pro Series settings updated to match the CWL, and let players experience the game just like the pros.

League Play Events
In-game League Play makes its return in Black Ops 4 with a tighter, more intense 3-day limited event format. Players will be assigned to a League Play Ladder after their first game in League Play. Players may compete as a team in Team Ladders, or as a solo competitor against other solo competitors in a Solo Ladder. Events will use the Pro Series settings and format, and players will earn BO4 Ladder Points for wins (or lose points for losses). Earn the most Ladder Points by the end of the event to take 1st Place.

League Play events will be scheduled with a frequency of about once a week to once every two weeks to maximize the intensity of competition and the excitement that comes with the competitive community playing in events together at the same time. Every victory counts!

Gauntlet Events
The Gauntlet is also a time-limited event where players play a series of consecutive matches to maximize wins. To complete the Gauntlet, reach a certain number of wins before hitting a certain number of losses. Each loss counts as a strike, and players who accumulate too many strikes will have to start the Gauntlet over. The best part: completing a Gauntlet will grant players special in-game rewards to showcase their victory. The Gauntlet is designed to be a more accessible and digestible competitive style of play that’s easy for every player to understand.

CWL News and Live Streams
From the World League Hub, players will be able to watch live streams of current CWL matches, as well as browse through a library of previous events and CWL broadcasts (availability may vary by platform). Players will also be able to get the latest information on upcoming CWL events.

Clans and Teams
Though you may play as a lone wolf, you’ll want to form a team and play together to get the best out of the competitive experience. Competitive teams are set up and managed through our Clans feature. Within a Clan, players can create a team of up to 7 members, allowing players to compete with a fixed roster, but with the flexibility to sub out team members as needed to accommodate differing schedules. Clans support up to 100 players, and players within Clans may become a member of up to three teams, allowing even more flexibility to play together. Teams have a name, emblem, and their own home page in the Clan Headquarters to easily gather and play together.

And you don’t need to play competitive to enjoy the Clans feature. It is also an awesome social tool for players with shared interests to group up and always have partners to play with, whether playing multiplayer, Zombies or Blackout.

We can’t wait to kick off the Black Ops 4 competitive season with our fans and professional player community in December with the debut of the World League Hub alongside the official start to the Call of Duty World League Season. The World League Hub is our most ambitious competitive feature-set to date with news, schedules, live streams, Clans and Pro Series events. You will find there is something for every level of competition, whether you’re a hardcore competitive player fighting to the top of a League Play ladder or a casual player getting into competitive for the first time in the Gauntlet.

And of course, as with all aspects of Black Ops 4, the launch of the game is only halftime. This marks the beginning of a long journey we’ll take with our fans, and we will grow and adapt the game based on the feedback of the competitive community.

Be sure to check back regularly for more information on the CWL and upcoming competitive events. Follow the Call of Duty World League on Twitter for up-to-the-minute updates on the upcoming season.

The Launch of Call of Duty: Black Ops 4 is just the beginning...