Take a deep dive into our new Zombies experience coming on November 5th.

Your Gameplay Guide to Vanguard Zombies

Call of Duty®: Vanguard Zombies arrives this Friday, and we’re kicking off launch week with the details you need to prepare for the next chapter of the Dark Aether story on November 5th.

During last month’s Vanguard Zombies First Look, the team at Treyarch introduced an all-new, objective-driven Zombies experience in “Der Anfang,” spanning four locations at launch: Stalingrad, Merville, Paris, and Shi No Numa. We debuted the official Gameplay Reveal Trailer to the world, introduced all-new characters at the Call of Duty Blog, and showcased the Dark Aether powers that you’ll wield in-game. And later this week, we’ll unveil the “Der Anfang” Intro Cinematic to shed even more light on the narrative journey that lies ahead.

In our recent Zombies team Q&A, we mentioned plenty of returning elements that long-time fans know and love – including the Mystery Box, Pack-a-Punch, Perks, the Monkey Bomb, and more – as well as the return of the Crafting Table, Custom Loadouts, Armor, and Exfil systems from Black Ops Cold War. But we’re also delivering an entirely fresh take on Zombies in Vanguard, and there’s a mountain of new gameplay systems to dive into. Let’s get started.

At the Treyarch Blog, we introduced a sinister new antagonist coming to Vanguard Zombies: Wolfram Von List. Through the power of Dark Aether magic, he has formed a bond with Kortifex the Deathless, a former Dark Aether lord with the power to raise the dead, threatening to turn the tide of the second World War. Thankfully, you’ll have the opportunity to call upon the Artifacts of four rival Dark Aether entities to aid in the fight against Kortifex and the Third Reich.

These entities are known as Saraxis the Shadow, Bellekar the Warlock, Inviktor the Destroyer, and Norticus the Conqueror. At launch, they will provide players with the following Artifacts and abilities:

In addition to their gameplay benefits, these Dark Aether entities will serve as in-game characters in their own right. While the narrative will primarily be driven by the voices of demonologist Gabriel Krafft, Oberführer Von List, and Kortifex the Deathless, the other Dark Aether entities will provide their own unique gallows humor and commentary throughout the game.

Similarly, players can expect the operatives the entities are bonded with to be a bit more... shall we say, “expressive” in their opinions compared to the more serious, mil-spec tone of the Operators in Black Ops Cold War. Although the setting of Vanguard Zombies may be brutal and disturbing, let’s face it... we’re all here to have some fun!

THE ALTAR OF COVENANTS: 32 NEW UPGRADES

In addition to an ever-changing gameplay space and increasingly difficult Objectives, the Altar of Covenants is one of our biggest innovations in Zombies to date. Covenants offer powerful new abilities to equip as you progress through the match, provided in exchange for the new Sacrificial Heart loot item earned by completing Objectives.

You’ll get access to 11 unique Covenants at launch, each with multiple rarities for a total of 32 upgrades to explore. The initial set of Covenants includes:

You can have up to three Covenants at a time, and the selection of available Covenants randomizes after each Objective completed, so you’ll always have new specialties to choose from. Alternate Ammo Types (AATs) from previous games have also been incorporated into Covenants for the best of both worlds, including favorites such as Brain Rot and Cryofreeze.

By experimenting with different combinations of Covenants, Artifacts, Perks, and weapons in each run, you’ll create powerful new builds and discover personal strategies to help you survive further into the next match. You might find certain offense-based combos may better suit your needs in Solo matches, while other support-driven builds might work better with a full squad. The choice is always yours.

The true strength of Covenants lies in their upgraded rarities, however. For example, while the Rare version of Cull the Weak deals +50% damage to slowed or stunned enemies, the Legendary version can deal a whopping +100% base damage in addition to +100% critical damage. Combine that with Cryofreeze and Dead Accurate, and you’ll be shredding through zombies in no time... as long as you can hit your targets and stay alive.

A NEW SELECTION OF UPGRADEABLE PERKS

As you complete more Objectives and unlock new areas of your forward operating base in Stalingrad, you’ll gain access to Perk Fountains containing brand-new upgradeable abilities. This Perk system is entirely different from previous games, with all-new theming to match the occult setting of Vanguard Zombies, offering a streamlined approach on the surface with deeper gameplay potential as you get deeper into each match.

These are the five Perk Fountains available in “Der Anfang”:

For the first time in Zombies, the base Tier of each Perk will be free once you unlock access to it, and you’ll be able to upgrade each Perk up to Tier 4 in-game. This is a shift from the out-of-game Skill Tier system in Black Ops Cold War, offering new ways to invest in your Perks in real-time as you play.

Perks will offer powerful base stat upgrades at each Tier, but they won’t come cheap. Once you’ve activated the free Tier 1 version of a Perk, you’ll need to pay 2,500 Essence for Tier 2, then 5,000 for Tier 3, and 7,500 for Tier 4. Each upgrade will increase a specific base stat, with higher Tiers providing bigger enhancements. As an example, Fiendish Fortitude provides +25 Health at Tier 1, and goes all the way up to +100 at Tier 4 for a massive boost in survivability.

In another Zombies first, you’ll keep the base-level Perks you’ve acquired so far if you’re downed, since the first Tier is free. But beware: you’ll also lose one Tier from each of your Perks, which can be devastating in high rounds. Remember, upgrading from Tier 3 to 4 costs far more than going from Tier 1 to 2, so you’ll need to stack your upgrades carefully to avoid bankrupting your Essence after you go down. Choose wisely.

With the addition of Covenants and other new gameplay elements to the mix, we’ve streamlined weapon acquisition and upgrades while keeping the Pack-a-Punch as crucial as ever.

This time around, you’ll need to loot chests, spin the Mystery Box, and watch for drops from powerful enemies at higher rounds to get your hands on additional weaponry in lieu of old-school Wall Buys. You’ll manually upgrade your weapon at the Pack-a-Punch machine once you’ve saved up enough Essence as usual, though the costs now start at 7,500 Essence for your first Pack, then 15,000 for Level 2, and 30,000 for Level 3.

Weapon Tiers are now defined by their Pack-a-Punch level, denoted by four colors:

Also new for Vanguard Zombies, pre-Packed weapons can now drop from Sturmkriegers or be awarded from the Mystery Box, so it pays to keep an eye out for your next upgrade in the field! You’re definitely going to need it as the rounds keep going up.

Continuing from Black Ops Cold War, you’ll have the ability to bring custom loadouts into Vanguard Zombies. This allows you to customize a starting primary or secondary weapon and designate the Artifact you’ll take into battle.

If you’re starting fresh on Day One, you might want to jump in with one of our five preset classes to get familiar with a variety of weapon classes and every Artifact. These include:

Of course, your starting weapon in any loadout will begin at the lowest damage level (White/Unpacked), so you’ll have to get work on upgrades and finding other weapons as soon as the match gets going. Good luck out there.

A NEW EXPERIENCE WITH EVERY MATCH

In another twist on the Zombies formula, the gameplay space will now change throughout the match as Kortifex’s Dark Aether barrier shrinks and expands. This means no two games should feel the same as you take on shifting variations of the core Objectives at launch: Blitz, Transmit, and Harvest.

One minute, you may find yourself fighting for your life in a single corridor of Shi No Numa, and the next, you could have access to both floors of the main hut. As the rounds continue, keep an eye on the barrier markers to designate the playable area for each new Objective, and make sure you don’t get yourself cornered.

And that’s just the start... 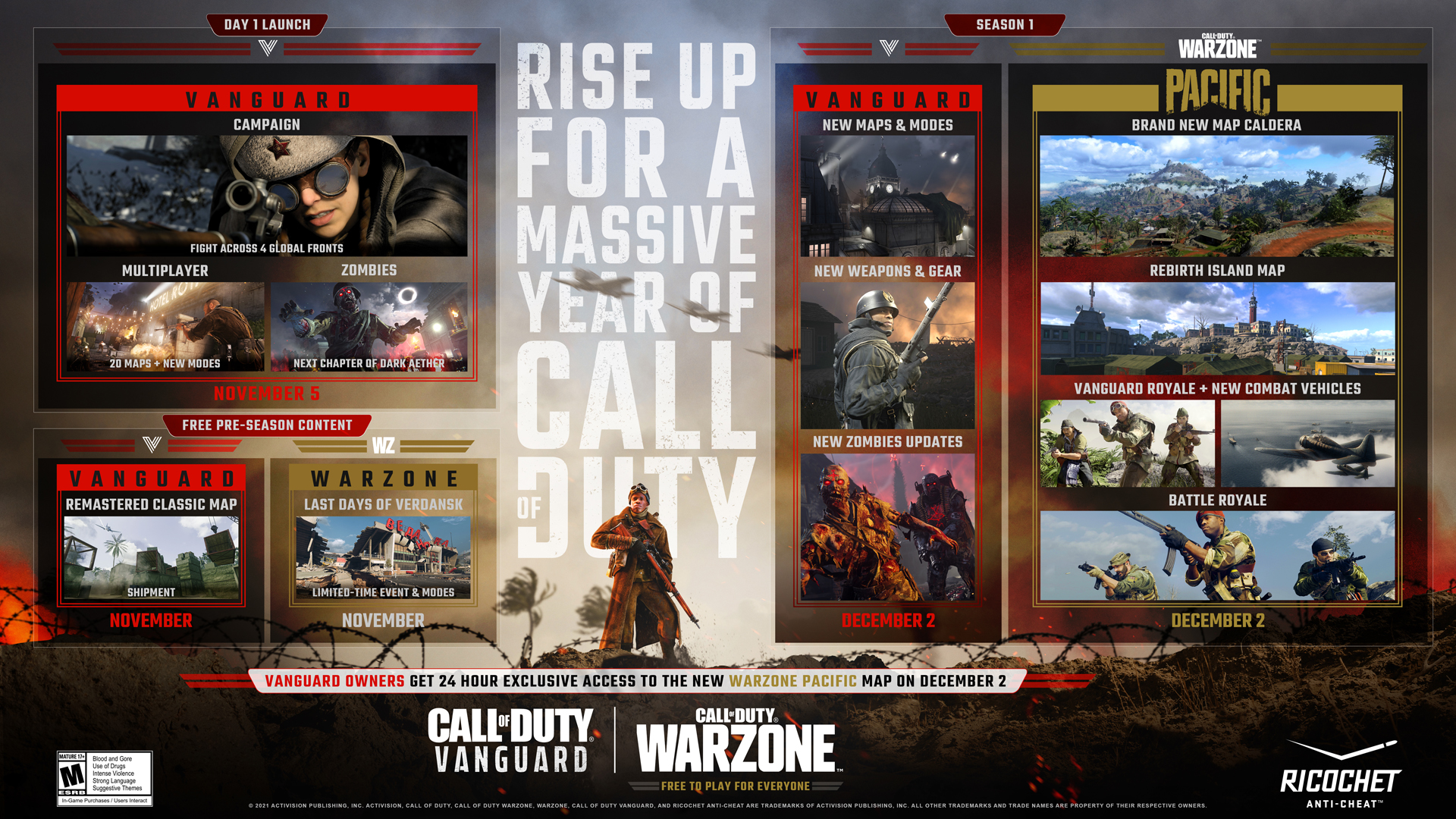 SEASON ONE AND BEYOND

As always, launch is just the beginning.

Starting on December 2nd, new Zombies content & features will begin to roll out in Vanguard, including a new Objective, additional Covenants, new weapons, Zombies Season Challenges, holiday-themed updates, and more. Players will also encounter some other surprise elements later in Season One that will set the stage for our upcoming Main Quest.

This Main Quest will be tied to the arrival of an unexpected ally after Season One, which will further expand the narrative of the Dark Aether, and reveal more details about the characters and entities that players will have encountered thus far. Check out the Call of Duty Blog for more details on what to expect across all of Vanguard during the Preseason and in Season One.

Post-launch, the team will also add new Artifacts as additional Dark Aether entities join the fight against their ancient enemy, Kortifex. Each of these entities will bring their own unique powers and personalities to the game for an even more immersive experience as the seasons continue.

While there’s a lot of innovation to showcase and celebrate this year, some things never change... including our commitment to the music of Zombies.

Listen above for a sneak peek of “Damned 5,” the official main theme of Vanguard Zombies and the latest entry in the “Damned” series that started with the original Black Ops. This newest arrangement was written by composers Jack Wall, Bear McCreary, and Treyarch’s own Kevin Sherwood, with mixing by Phil McGowan. Check out the full version of “Damned 5” when you boot up Vanguard Zombies for the first time on Nov. 5th! 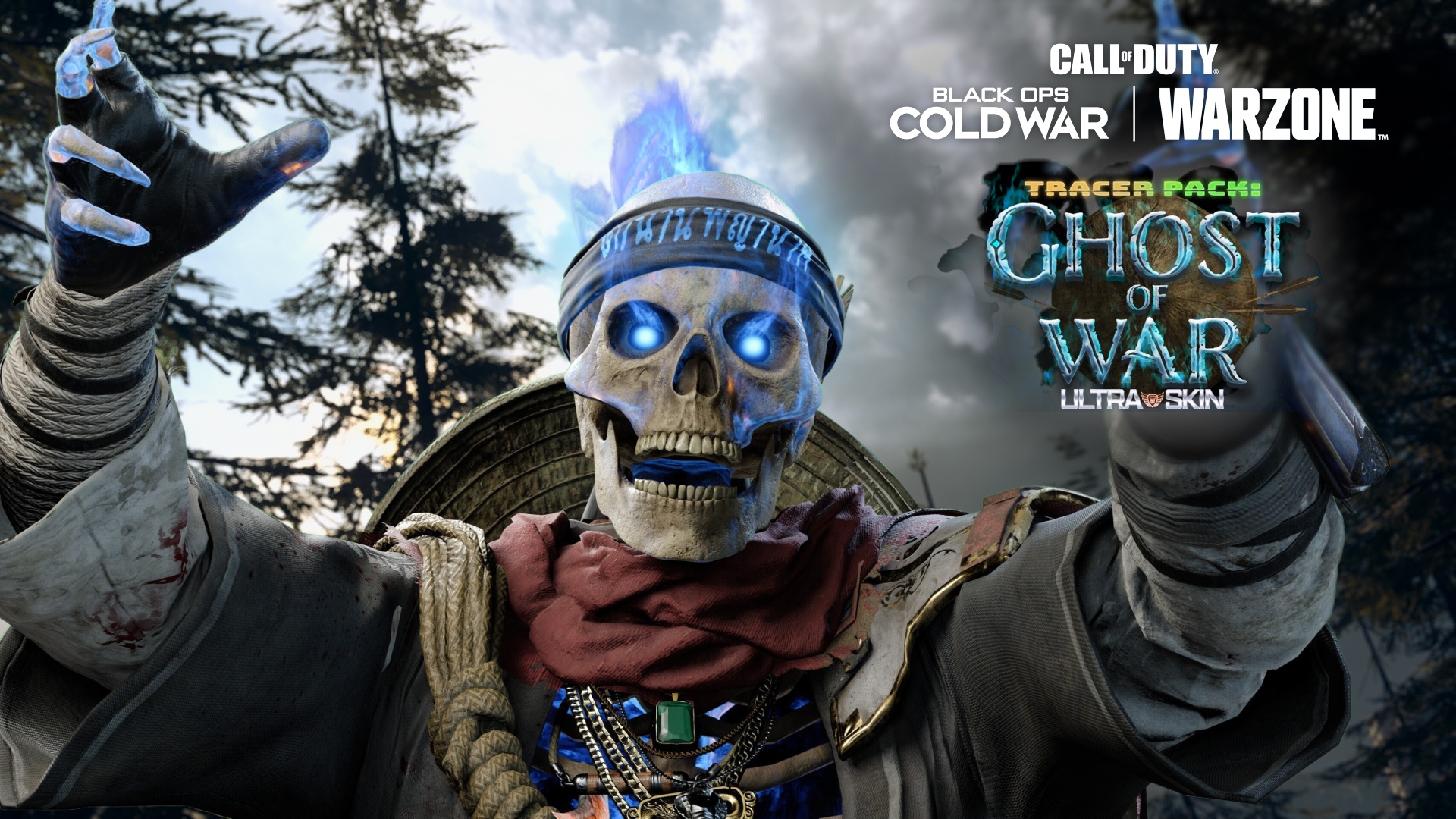 As a limited-time bonus for digitally pre-ordering Vanguard, you’ll also get the terrifying “Ghost of War” Ultra Skin in both Black Ops Cold War and Warzone™. November 2nd is the last day to get in on this offer, so you’ll need to act fast!

If you’ve already pre-ordered, be sure to log in by Nov. 2nd, and this new Ultra Skin for Naga will be automatically added to your inventory in the Operators menu in both games. As a reminder, all XP earned in Vanguard during the Preseason will also apply to your Season Six progression and Battle Pass in Black Ops Cold War and Warzone. 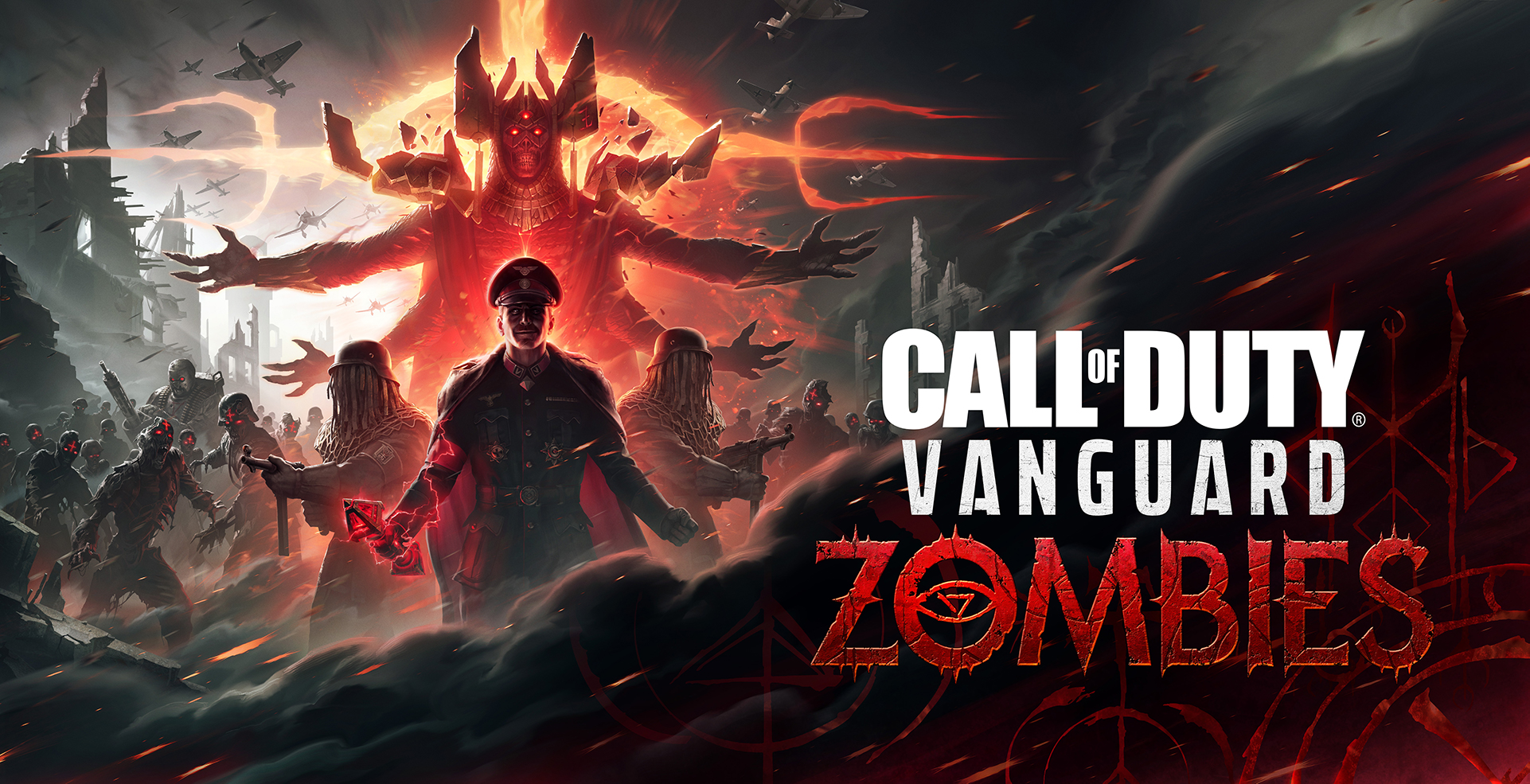 To kick off launch week, we’ve assembled a collection of all things Vanguard Zombies to share on social as we count down to Friday. Download the official Call of Duty: Vanguard Zombies Fan Kit to get started, including:

“Der Anfang” will be in your hands in just a matter of days... don’t forget to have fun out there!

As always, we’re honored to bring a brand-new experience to the Zombies community, and we can’t wait to jump in and play it with all of you. We’ll see you online on Nov. 5th in Call of Duty: Vanguard, available for pre-order now.

The Software License and Service Agreement will be updated. Please follow this link [https://www.activision.com/en/legal/ap-eula] in order to see these changes.